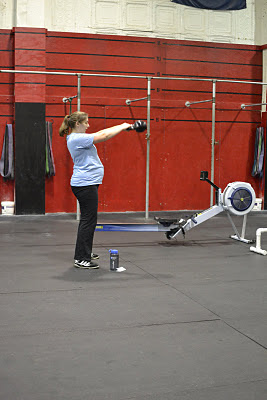 My name is Jackie, and I'm currently 24 weeks pregnant. I am expecting my first child (a son) on March 27th, 2012. Let's rewind to before I was pregnant for a second...I was slow to come to Crossfit...I had been friends with Aimee and Jason when they started Crossfit KOP but just wasn't motivated to work out. Then I spent a year doing my internship in Syracuse, living away from my husband and eating horribly, since my husband does all the cooking! I probably gained about 15 pounds and didn't like the way I looked at all. Meanwhile, at home, my husband had begun crossfitting and was noticing effects. Then in September of 2010, I returned home from Syracuse and was resolved to do something about the sad state of health I was in. About a week after I was home, I set up my fundamental sessions with Aimee...3 in one week after being non-active for a whole year (sure I dabbled in running sometimes or walked the dog, but really, that doesn't count). I couldn't move for a quite a while after those sessions, but I was hooked. So I started doing Crossfit lite classes once a week, as I was nervous about my ability to 'keep up' in the regular classes (I didn't really understand the concept of scaling back then). On Veteran's Day (11/11/10), I did my first regular WOD, Michael, and haven't looked back since.

Pre-pregnancy, I worked out twice a week (never really got to the point where I was Rx'ing WODs, but I could hold my own and lift up heavy weights) and was taking a month off after a neck injury when I found out I was pregnant. The neck injury was a great cover as I struggled with the first trimester slow down and kept people from asking me why I wasn't functioning at the same level during the workouts. I decided to tell Aimee I was pregnant to get some advice on crossfitting pregnant...as I'm sure most people have heard no heart rates above 140 and don't lift anything over 25 pounds from their doctors. Mine told me to not worry about the heart rate so much and to not lift anything over 25 pounds, but in the same breath said to continue what I was doing pre-pregnancy in terms of working out. My husband and I talked about it and decided to listen only to the last bit of her advice, and I have kept on crossfitting.

How to scale the WODs was difficult for me to figure out at first...I mean, sure I could do the WOD to the scale I was doing prior to being pregnant and that's exactly what I did for the first few months, but I started noticing that my recovery time was longer. The soreness lingered and it was WAY worse than before. That was when I decided I had to stop holding myself to the same standard mentally. Not that I should slack off in the WOD or stop doing my twice a week, but I knew I had to come in thinking that I was scaling the WOD, sometimes by half, or else I'd end up doing the whole thing and be hurting for many days after. It's been a really hard switch for me mentally, as I know I can still do the workouts, but it would take me way longer and the price after would be worse. That's when I started looking more to Aimee for advice on how to scale; she definitely has helped me to program my WODs accordingly. If I was going to a globo gym, I probably would've quit working out by now because I wouldn't know what to do without the guidance and support I've gotten from all the coaches and the community at KOP...there isn't a day that goes by when I'm at the box that someone doesn't give me some positive reinforcement for continuing to come to class while pregnant. It makes it a 1,000 times easier to show up when I'm exhausted after work!

Just recently, I've begun noticing my belly getting in the way of some movements that I haven't scaled. For example, I definitely bumped my belly when doing a snatch the other day (which means that I had good form at least)! I think it will be interesting to see after pregnancy how all the adjustments I'm going to continue to have to make to do lifts and WODs will affect my form later. But all in all, I've had a fairly easy pregnancy so far, which has helped me to be able to continue to be active. I plan to crossfit until either I deliver or my body (or my doctor) tells me it is time to stop! 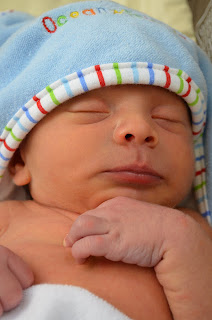