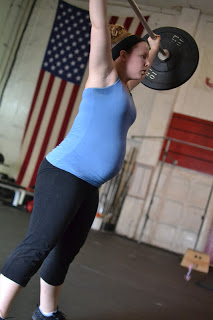 My name is Lindsey, and I am currently 35 weeks pregnant.  This is my first child, who is expected to arrive October 29, 2012.  Oddly enough, one of the first signs of my pregnancy appeared during a CrossFit WOD.  It was the St. Valentine’s Day Massacre, and I was partnered with my husband, Chris.  Boy, does that workout test a relationship!  Anyway, we were finally nearing the end and just had to get through the sit ups and squats.  These are two of my favorite movements.  So, although I was tired, I thought the rest of the workout would be all downhill from there.  Wow, was I wrong.  During the sit ups, I started feeling nauseous, but I was able to just push through that.  The squats were another story.  I will never forget having about 20 squats to go until the end and trying not to throw up almost every time I stood up out of the squat while Chris yelled, “Go faster.  Don’t stop.  I can’t hold this plate any more.  Just finish!”  He didn’t know I wasn’t feeling well.  I made it through those last squats and ran straight to the bathroom.  This was the first sign of my pregnancy, even before I knew I was pregnant.  See, I began CrossFitting about 2 ½ years ago and very rarely got nauseous during any workout.  Then, twice in one week I very quickly got nauseous.  Surprise, surprise...not long after, I found out I was pregnant.

I have continued CrossFitting throughout my entire pregnancy.  I didn’t really tell anyone at the box until I was out of my first trimester, but I began being more careful during workouts.  My doctor told me, “You shouldn’t be lifting heavy stuff...no more than 35 pounds, but it’s important to keep exercising during pregnancy.  When I say exercise during pregnancy, I mean walking.  However, whatever you were doing before you were pregnant, you should be fine to continue with during your pregnancy.  Do NOT start a new exercise routine.  Just be careful about what you are doing and take it easier than you did before.”  So, I lifted lighter weights than I normally would, and I didn’t push myself as much as I had before I was pregnant.

I told Aimee about the pregnancy around my 13th week.
She was so excited for Chris and me and so supportive.  She has helped me scale WODs appropriately...right down to giving me a special pregnancy WOD if I texted her the day of because I couldn’t figure out how to modify whatever was programmed for that day!  Instead of focusing on setting personal records and improving my numbers in the gym, she has helped me focus on scaling workouts, improving my form, and fitting in a healthy workout for me and the baby.  All of the other coaches at the box have been so supportive as well.  Many of them allow me to create my own warm-up that’s more pregnancy friendly, and they will all help me scale when I’m not sure about something.  They also check in with me to make sure I’m feeling alright while still encouraging me to find inner strength and keep going.   During the hotter days this summer, they all made sure I got the prime location in front of the fan – one of the perks of pregnancy ☺.

I have been lucky throughout this pregnancy.  I truly believe that without CrossFit, it would have been much, much more difficult, and I would have likely put on way more weight than I have.  CrossFit has helped me stay active and healthy during these past few months.  My hope is that it will help make labor and delivery that much more manageable as well! 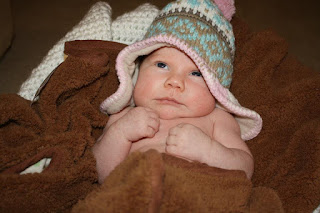